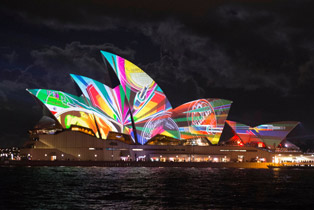 The city of Sydney will once again be bathed in a colourful display of lights when the Vivid Sydney festival kicks off on Friday the 23rd May. Running until the 9th of June, Vivid has become one of the city’s most popular events. Last year the display attracted over 800,000 visitors and earned the title of Australian Event of the Year.

Plans for this year’s festival include roving performers, interactive light installations, with the opportunity to personally choose and customise the lighting effects on the Sydney Harbour Bridge.

Boasting the best views of the Bridge and across to the Opera House, the focus is on family friendly activities. North Sydney attractions include the Sea of People, a group of silhouetted figures by sculptor John Wright on the Milsons Point Foreshore, and Sea of Lanterns, which will illuminate Bradfield Park South with 70 lanterns under the Sydney Harbour Bridge. Vivid isn’t only about light installations, there also a range of events planned including the Incredibly Short Film Festival at North Sydney Olympic Pool.

Garfish Kirribilli is excited we are once again going to be so close to the action. Just a short stroll from Milsons Point station, our restaurant is the perfect dining option for a night out enjoying the Vivid festival. Bring your family and friends and enjoy a relaxed meal, then it’s only a few steps to the Milsons Point foreshore and the light display.

Kirribilli is open for dinner Monday to Saturday and we accept dinner reservations between 6pm and 6.30pm. After that time, tables are allocated according to demand. Feel free to call ahead on 9922 4322.

For more information on the Vivid attractions in North Sydney click here.